Am I ready for the challenge? Oh yeah! I've been prepping a lot these days ( as most of the challengers in fact). I still haven't finished priming everything, but it should be done shortly, at least I hope so. I intend to reach my 800 points goal this year, since I almost got it last year. So, what will I do? It's now time to write down a list:

- some medieval civilians in 28mm, From Perry. They were sent by Big Lee when I had won his giveaway draw. They will be perfect for the first themed bonus entry.

- Some Gladiators from Foundry

- The Franco-Indian war minis Loki sent me for the charity.

- A lot of 15mm ACW, for my Longstreet army. The guys at the club would like to start in January. Well they might not be entirely painted by then, but at least they will be based and therefore playable ;)

- the camp for my Carthaginian army. And it will be used as a bonus entry too.

- the entry fee for the challenge. It could count as two bonus entries, if I do it well;)

- some biblical suff in 15mm, since I'd like to enter an Art de la guerre competition later in 2014.


On the gaming front, I played another game of Longstreet last week, and it was a blast. I played in 6mm and took some pictures. So, you can expect a battle report quite soon. 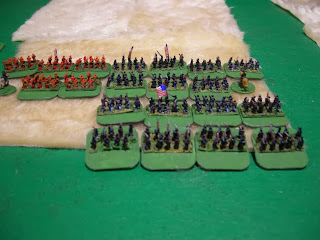