A new convention, and a good book

First of all, James, the exiles painter, has managed to transform one of his ideas, a convention of wargaming bloggers, into reality. In November, if you happen to go to Nottigham, you'll be available to attend what could be a new kind of event, hosted by the guys from Wargames Foundry. He set-up a new blog to give some info about it, but I asked him if I could design a website for it, and James kindly agreed. Cool. Now it's time to work!

I also have an idea for a game: this could be the opportunity to host a demo of Art de la guerre, whose English version will be published-it's now official- between September and October, Of course, I would bring my 28mm army.

Now. As a tutor, I spent a lot of time in the transportations. Therefore I had to bring something to read. My wife had offered me for Christmas a science-fiction novel, called the Windup Girl, by Paolo Bacigalupi. 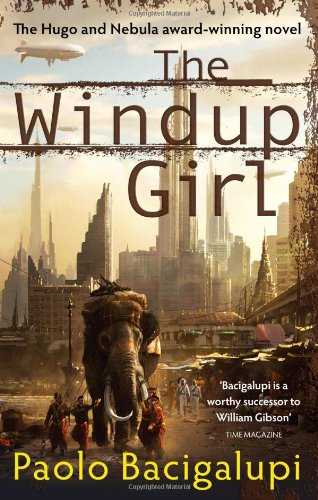 What would happen in a more or less distant future, when you don't have any more gas / electricity, and when genetic engineering though efficent at first, produced catastrophic pandemics, such as blister rust or cibiscosis? Each time you create a new product, it's a race against time before it becomes infected, and starts killing people... Yeah, very bleak.

The story takes place in Bangkok, which happens to be a more or less safe place, because of the trade rules, forbidding officialy everything from the outside. People try to live and have an economic activity, using the power from springs and an engineered creature, the megodont...

We have 5 main characters, Anderson Lake, a foreigner managing a sprig factory, but seems to have a secret agenda, one of his Chinese employee, working illegally because he had to escape China, which has fallen under Islamist law, two whiteshirt officers, working for the Environment ministry, and Emiko, a human looking creation, who ( yes I say "who") ends up in a brothel...

Good gallery of characters, isn't it? So, why did I like the book? Well, first of all, every chapter is focused on one of the characters, which is pretty classical, but as the book goes on, the characters meet each other, most of the time for the wrong reason, and you always have conflicts of interest. Trust me, it can be violent. What to choose between loyalty, survival, freedom or personal success?

Paolo's style is good, and we feel rapidly immersed in the hot and wet climate of Bangkok, try to guess what will happen next because of the decision of one of the characters. And trust me, if the plot takes time to be ready, onece unfold, it is brutal! Let's just say you have the army, the foreign genetic engineering companies, and murder, and a plague involved... And the end is very interesting, not the one you could expect from a more classic sci-fi book.

Would I recommend it? Yes definitely. Would I read it again? Probably not, because everything is linked to the plots and the characters stories. Once known, well, the magic is gone.
And what about you wargamers? This book is perfect to create a dark and gloom future setting, trust me on this.

My final rating is therefore 4 out of  5. If I could persuade myself to read it again, I'd go for the 5.

Email ThisBlogThis!Share to TwitterShare to FacebookShare to Pinterest
Libellés : Reading