There! You look a bit more human now

I was at the club yesterday evening, mainly for watching a game between Tim's Chinese and Alan's Successor army for the second round of the Ancients competition. Yes I was spying, gathering some intel, but it's always interesting to see other people playing your army.  I now have some more ideas to play my Warring States. Thanks Tim. So, As you would expect, I didn't do much painting. There you're wrong. I had enough time during the day to ink/wash my unit, and start the highlights. 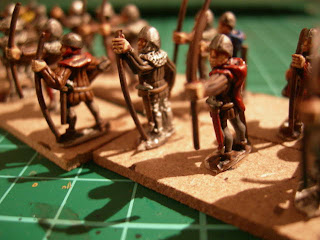 It should be over quite soon I think.

Meanwhile, I now know my opponents for the second round of the Ancients Comp:
- Chris and his Neo-Assyrians: lots of heavy chariots and good shooty cavalry. Argh
- Andy and his later Seleucid: pikes, cataphracts, and lots of nasty stuff. Don't know what to expect from him
- Dave and his Mid-Republican Romans.... Arrrrrrggggghhhhh. Lots of killing machines. I'll have to avoid the legions as long as possible to hope for a win.