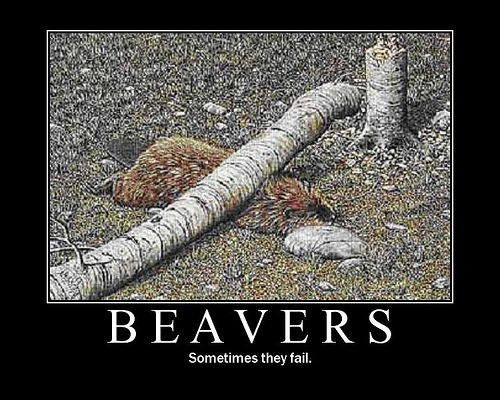 What a strange weather we have here. Today it's pouring, but yesterday, we had a wooping 17°C and lots of of sun. Geese, ducks and cranes are flying north again... in February... Anyway. Back to the brushes. And today we have some Franco-Indian wars stuff, what we French call the Wars in Canada.Hence the beaver (I know, I know, cliché...) But in France it's either that or the lumberjack. Now wait a minute...


First of all, a warm welcome to Edwin King .

What you have here are six 28mm British light infantry from AW miniatures.

You'll have to excuse the poor quality pictures, but my parents' PC refuses to acknowledge the existence of my camera's SD card, and of course I forgot to take the USB cable... When Andrew (Loki) and James launched their Bloggers for Charity project, I was immediately interested. They intend to game a battle during the Seven Years War in Canada. I have offered my services and Andrew sent me these figures to paint as a light detachment of the 44th Abercrombie. I was delighted since I knew I could then practice on my red and flesh techniques for 28mm. 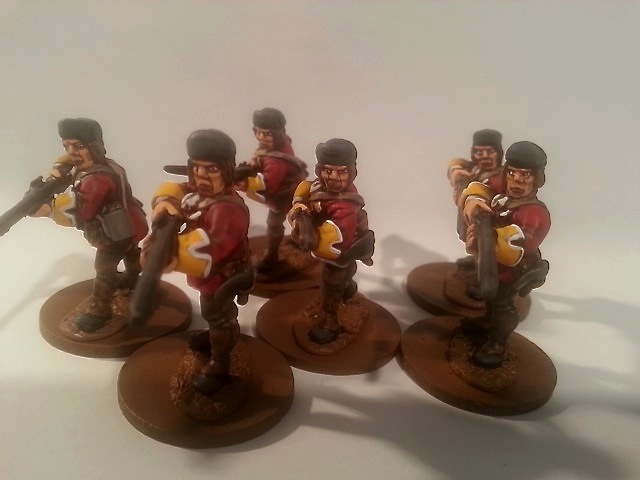 Here is a bit of History, from the excellent Kronoskaf website:
"On January 14 1755, the regiment (about 500 men) embarked at Cork in Ireland to sail to North America as part of General Edward Braddock's force. On February 20, it arrived at Hampton in Virginia. It was then ordered to march up the Potomac to Alexandria. New recruits were waiting for the regiment in Alexandria. It was thus brought to full strength (about 700 men). Early in March, the regiment reached Winchester. By May 10, it was with Braddock's expeditionary force at Fort Cumberland at the junction of Wills Creek with the Potomac. It took part to the disastrous attempt against Fort Duquesne where it suffered a heavy defeat on the Monongahela on July 9. The British force first retreated to Great Meadows (July 13), then to Fort Cumberland, leaving this fort for Philadelphia on August 2.

In 1756, the regiment was among the reinforcements being sent to Fort Oswego under colonel Webb. This force left Albany on August 14. Webb had scarcely reached the Great Carrying Place (actual Rome NY) when he was informed that Oswego had already been captured. When he received an erroneous report that 6,000 French were advancing upon New York, Webb ordered trees to be felled and thrown into the stream at Wood Creek to stop the progress of the French. Then, with shameful precipitation, he burned the fort at the Great Carrying Place and retreated down the Mohawk River to German Flats. 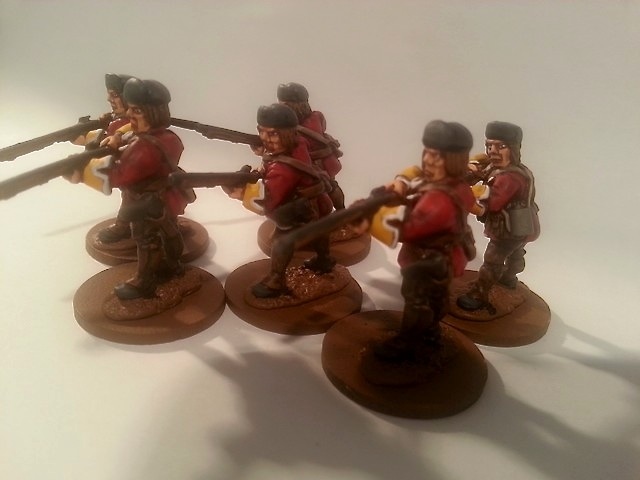 In March 1757, a detachment of the regiment (274 men) under major Eyre garrisoned Fort William Henry which was attacked by a French expeditionary force. The garrison repulsed attempts against the fort but the French managed to destroy the storehouses as well as the British ships assembled around the fort, thus preventing any British offensive on lac Saint-Sacrement (actual Lake George) during this campaign. In June, the regiment was at New York. The same month, it was transferred to Halifax in preparation for the aborted expedition against Louisbourg.

In 1758, the regiment formed part of the British expeditionary force under James Abercromby sent against Fort Carillon (actual Ticonderoga). The army assembled at Albany, then advanced to Fort Edward and Fort William Henry. On July 5, the regiment was embarked at the head of lake Saint-Sacrement (actual Lake George) and crossed the lake. On July 6, at daybreak, the British flotilla reached the narrow channel leading into Lake Champlain near Fort Carillon and disembarkation began at 9:00 AM. On July 8, the British army fought the battle of Carillon where it was utterly defeated, the 44th loosing 205 men. At daybreak on July 9, the British army re-embarked and retreated to the head of the lake where it reoccupied the camp it had left a few days before.

In 1759, the regiment took part to the expedition against Fort Niagara which surrendered on July 24. After the capture of Fort Niagara, the regiment was assigned to garrison Presqu'Isle on Lake Erie.
In 1760, the regiment was part of the British army assembled at Oswego by lieutenant-general Amherst. In August, this army advanced downstream on the Saint-Laurent river towards Montréal where it made its junction with two other British armies on September 6. Montréal surrendered on September 8, Canada was now under British rule. 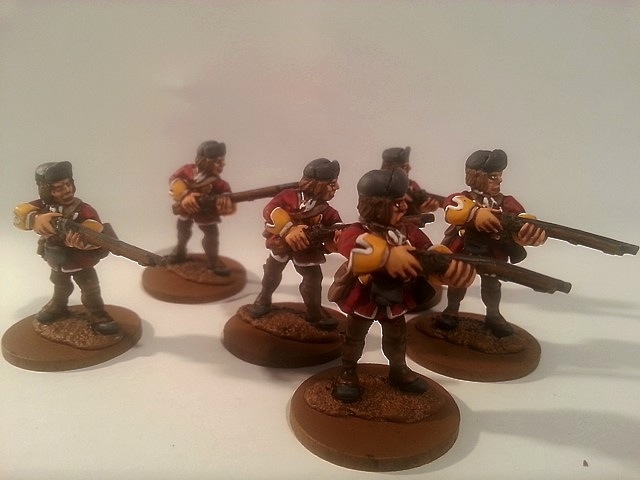 In 1761 and 1762, detachments of the regiment garrisoned Trois-Rivières, Chambly, Saint-François and other localities. By October 1762, the entire regiment was assembled in Montréal where it assumed garrison duty."


Sadly, the minis are not great. There was no flash but you can find some errors in the sculpting, such as the cartridge box but no belt to carry it !?!  And some cuffs and hands are miscast. Ah well. Still they were easy to paint. I haven't based them because as soon as James receives them, he'll do it. Here are the colours I used:
- minis primed in Army Painter Leather brown
- for the red: dark red 946, then Red 926, Red 947, and then Devland mud wash
- for the yellow: GW desert yellow followed by Yriel Yellow.
- for the gaiters: a simple Vallejo Sepia ink wash was enough.