I know I haven't been especially active on the blogging front. I'm really sorry about that. To compensate a bit, I've decided to enter Curt's challenge, once again, to try painting some more and blogging a bit. We'll see what happens. In the meantime, I've organized an Art de la Guerre club competition, and we are 20 players so far. I'm really happy about that. Hopefully, everyone will enjoy the rules.

But, for now, it's time for me to do a write-up of the games I played in a French tournament in mid-October. Be careful, it was with the V2 of the rules, not the V3. So some things might have changed. For this comp, I had chosen a favourite army of mine, the Carthaginians, with the Hannibal in Italy option. I didn't choose the great man himself, but one of his lieutenants, Doyoulikethepal.

Here is the army composition. There was a special rule about command, meaning we had more command points to move.

Carthage is often played in tournaments, but, most of the time, don't get very good results. It's a very tricky army to play, with no apparent strenghts (or not in enough quantity). I wanted to show people we could have fun with this army, and hopefully scare them a bit.

First, let me introduce my advisor, Master of the Inventory and general salesman, Jean-Luc Picard,  a veteran Gaul who chose to work with us.

And here we go. First round, our esteemed salesman, Doyoulikethepal, is sent to China to open more supermarkets. And he faced Bertrand Carnat and his Warring States Chinese. Tough army. 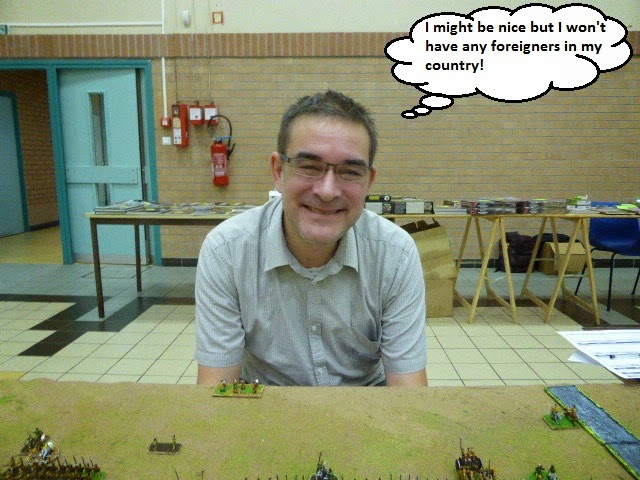 The Chinese got the initiative and decided to attack our army in a mountain region. Did he want to stop me using my cavalry? Well, after all, he has some heavy tanks, sorry, chariots. Here is the battlefield: 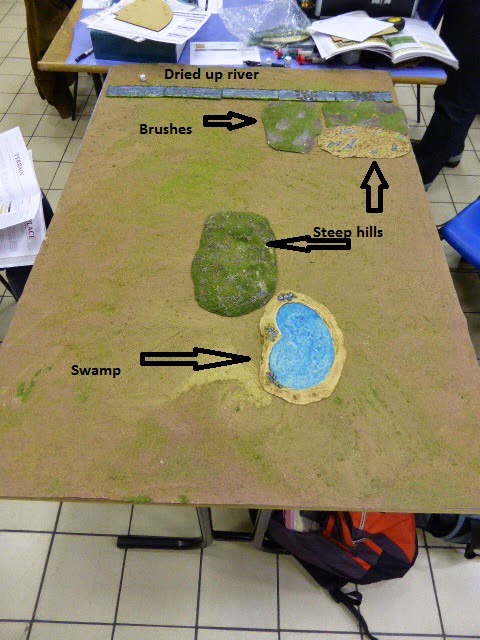 He deployed his tanks chariots on the left. He had some heavy infantry in each of his corps, some impetuous foot in the middle, and the cavalry on his right. He also had some firepower, thanks to his crossbowmen. Unfortunately for him, they were mediocre. 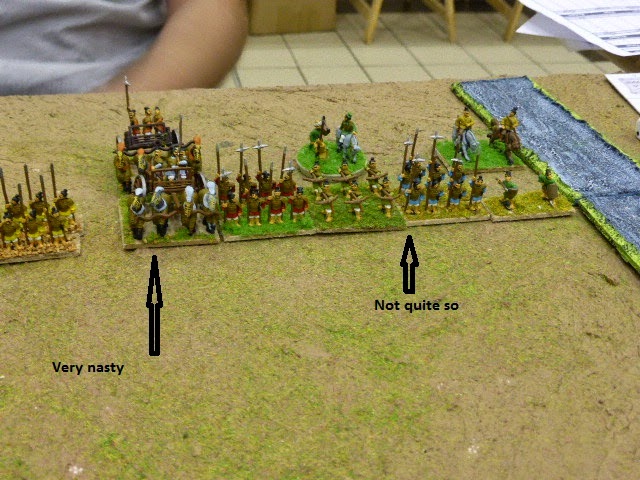 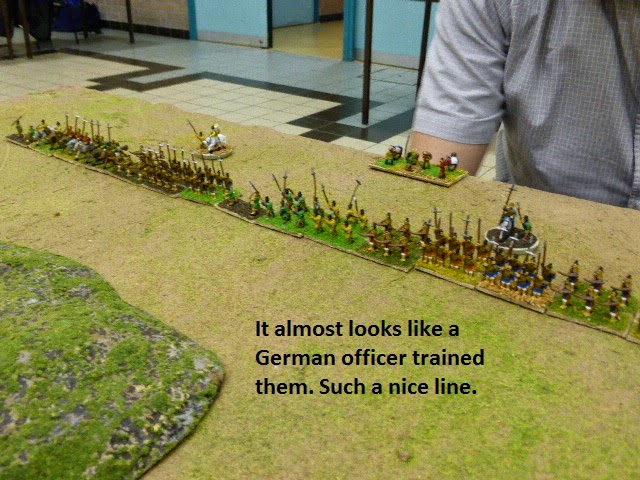 Doyoulikethepal had a different idea in mind, and opted for a more original deployment, an almsot Gallic one. 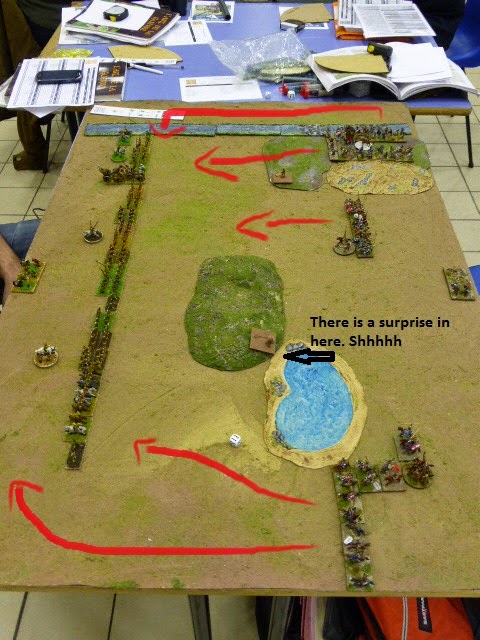 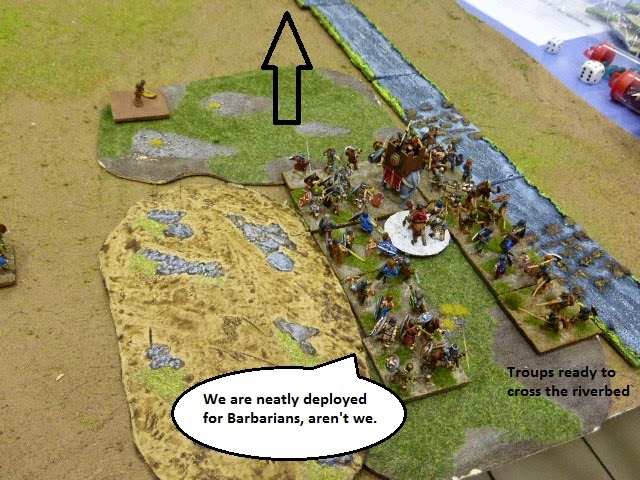 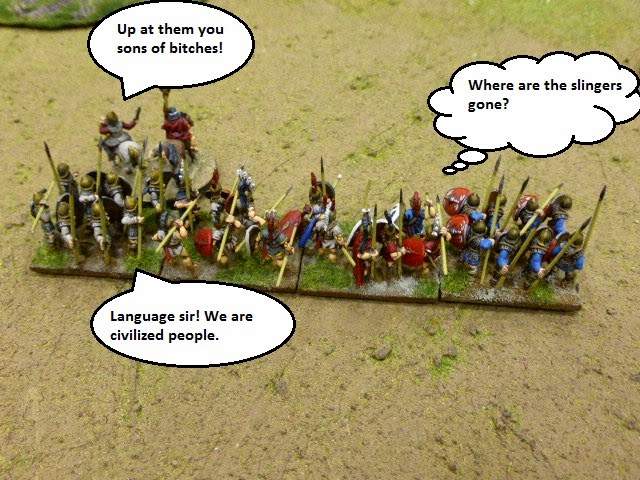 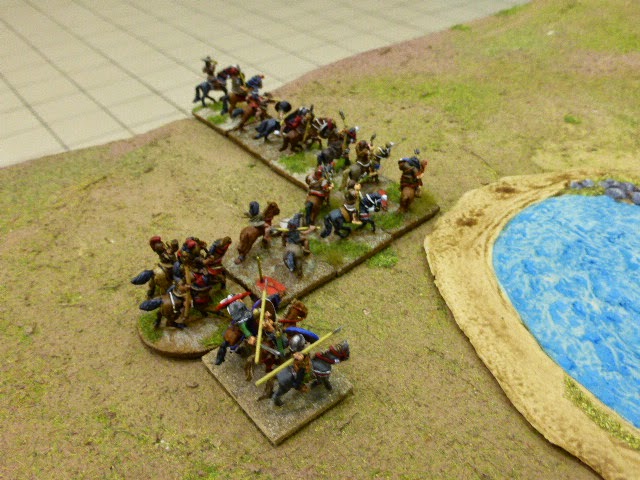 And the Chinese started the game, moving forward, almost like in a parade. Very German-like. 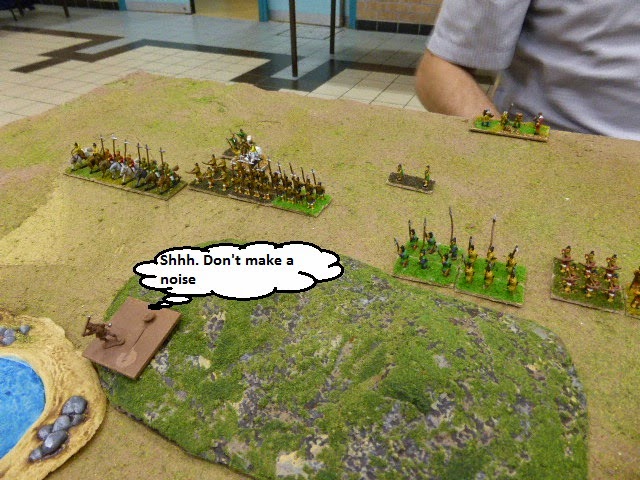 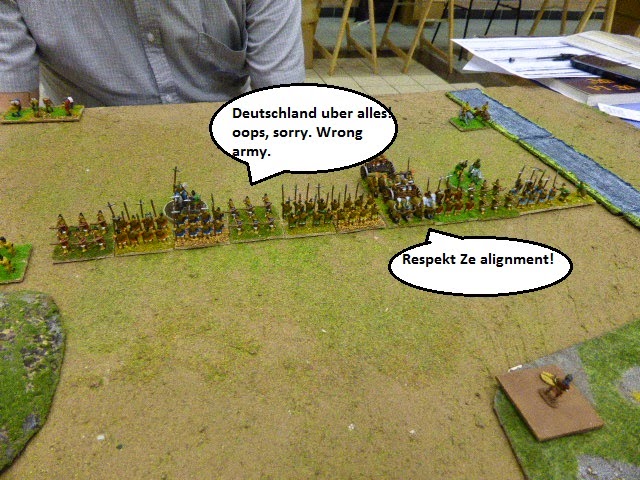 Then, the Carthaginians did their move. And the ambush was revealed: my 4 Elite slingers, in the steep hill. I knew the Chinese couldn't dislodge them. Skirmishers are the kings of the difficult terrain. My cavalry moved slowly, ready to jump at the ennemy's throat, from the flank. 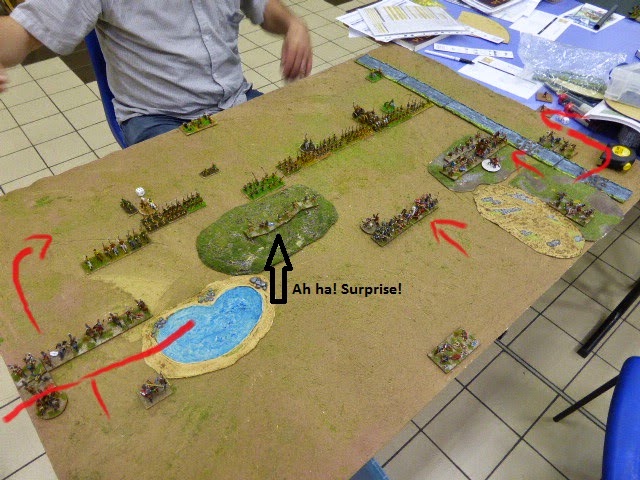 He tried to react, sending his cavalry forward, but iwas too late. My red light horses, after a crashing course on speed at Ferrari, were already past the flank 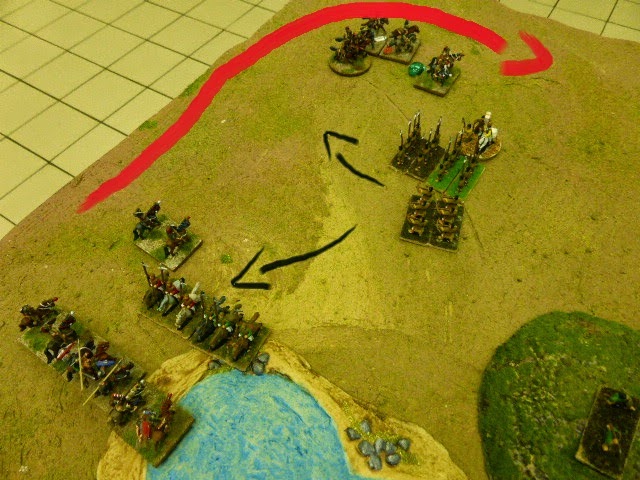 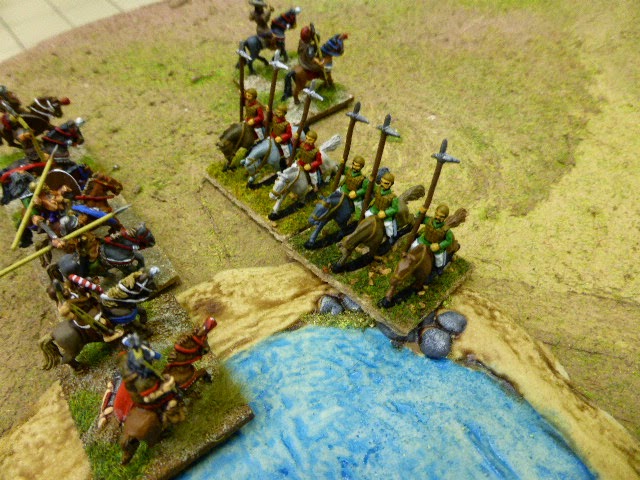 After a few turns, here is the situation: 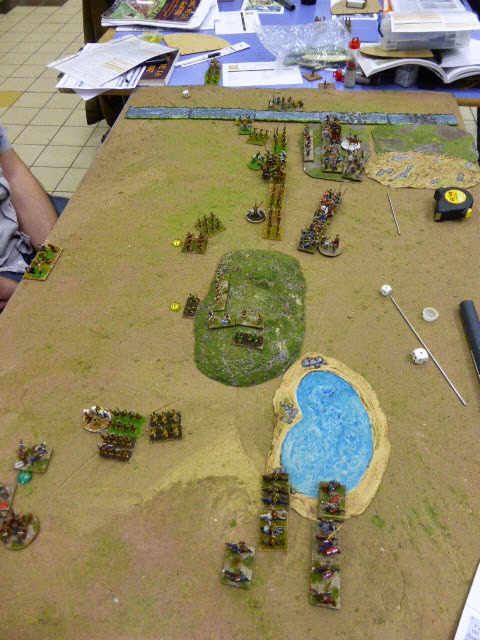 Because the Chinese know they will be outflanked on both sides, they decide to charge, and launch everything at us! 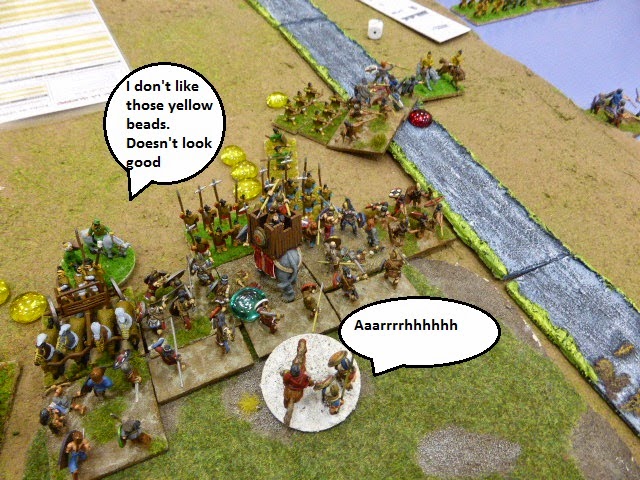 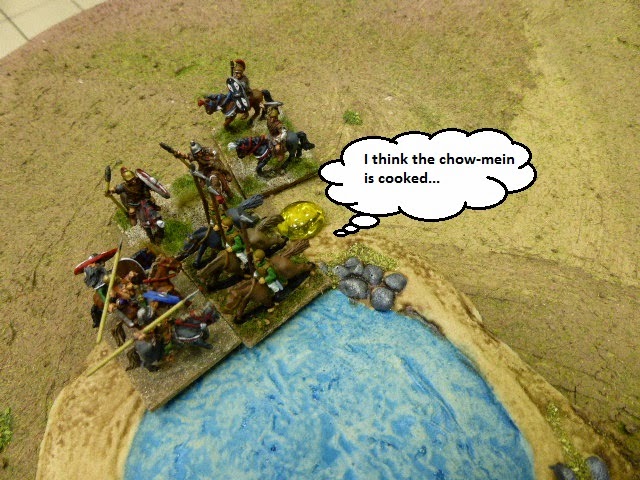 But I almost always fight with an advantage, and soon, everything goes downhill for them. 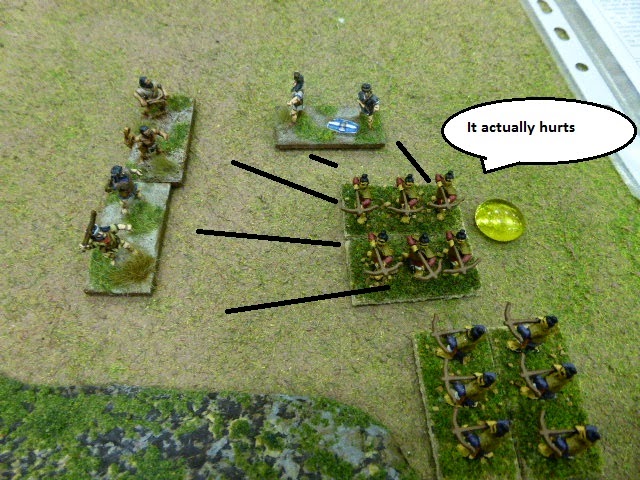 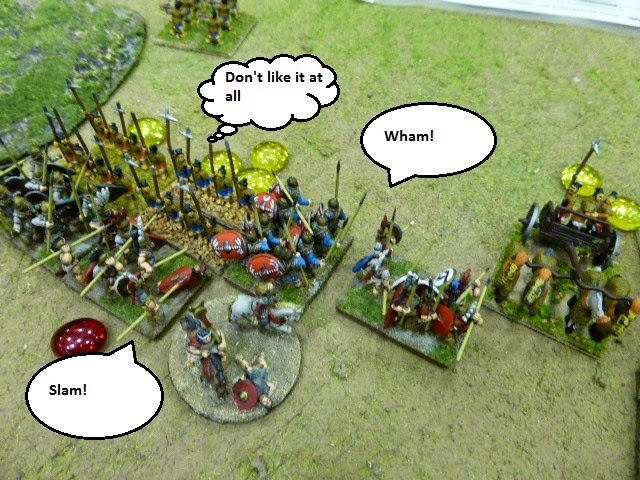 We even managed to take the camp, to fill our store because the sales. Everything must go! 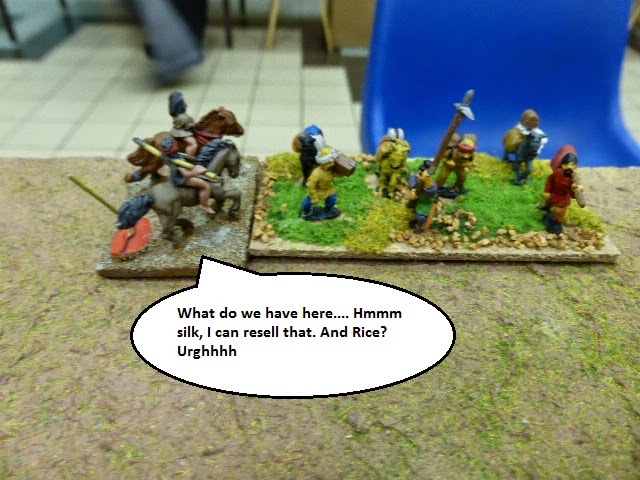 And with the light horse pillaging the camp, Victory is ours!  Carthage had only suffered a few losses, nothing important, they were expendable mercenaries.

Now, what does Picard think?

Well number 1, you played well, but luck was on your side. Bertrand is a beginner and made some mistakes you ignominiously exploited. It's not very starfleety you know. Especially the one where he attacked your skirmishers in the hill where you had the advantage. I'd say you might have some Romulan blood. Hmm I think I understand Carthage a bit more now. Your plan wasn't extraordinary and the terrain was on your side. You played it safe lad. We'll see next game if you're so good as you say. Meanwhile, after the "Wham", I feel a bit giddy and I'd like to dance a bit.
#Jitterbug#