Hello everyone. I'm back from the tournament, and it felt good to meet people playing the same game, in a good mood, sometimes talking nonsense. I managed to finish my army in the nick of time, doing the flocking in my hotel room on Friday night. Here is the proof: 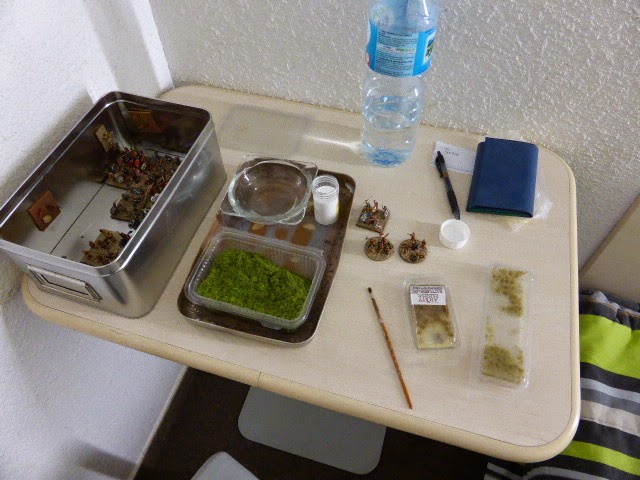 I played a Syracusan army, with more or less success. I'll tell you more about it later, I still have the pics to sort out. And now, I have to paint some stuff for another tournament next week-end, in Lyon. Yepee. But before that, let's do our weekly review. At least, if our internect connection allows me to do it... Bugger


We'll start with the batreps, with first the battle of Falkirk in 15mm, on a nice table:
http://kevswargamescabin.blogspot.fr/2014/04/an-alternative-falkirk-january-1746.html

Then , still in the lace and flouncy shirts, a test of Ga Pa during the War of Spanish Succession:
http://thewargameshed.blogspot.fr/2014/04/first-play-ga-pa.html

A bit of ACW with the battle of the Stones river:
http://lonelygamers.blogspot.fr/2014/04/maj-gen-hardees-attack-1st-day-of.html

Next, not purely wargame related, but still interesting, two bloggers have posted a series on specific subjects. First Matt's posts about Ypres:
http://thewargamestable.blogspot.fr/2014/04/ypres-part-four.html

And the, the Big Lee, with his series about historical stuff worth seeing in Dorset:
http://www.blmablog.com/2014/04/stocks-and-shares.html

Paul explains his simple method to get an effective base for your minis:
http://scrivsland.blogspot.fr/2014/04/how-to-do-those-scrivsland-bases.html

Next, Ecclesiastes has made some Islands. You might want to check them out.
http://calltoarmsmwg.blogspot.fr/2014/04/creating-island.html

And Comi Mec has done some great wooden fences:
http://elcantodelasespadas.blogspot.fr/2014/04/escenografia-valla-madera-wood-fence-scenery-warhammer-wargames-wargaming23.html

Now for the eye-candy. French Phil is showing the napoleonic 15mm Prussians. And you always like his presentation work:
http://riflemens.blogspot.fr/2014/04/waterloo-hougoumont-and-prussian-troops.html

Thanks to Oscar, I've found this greatly painted house Lannister in 28mm:
http://tabletopdeutschland.wordpress.com/2012/07/30/ein-lied-von-eis-und-feuer-lannister-miniaturen/

After having seen Dave's latest work in 54mm, you might want to watch the 7 mercenaries:
http://onemanhisbrushes.blogspot.fr/2014/04/the-pay-is-20its-chris-adams.html

And Yori has painted some lovely 15mm Numidians:
http://yori-hobby.blogspot.fr/2014/04/numidian-infantry-2.html

I really like Hetairoi's brushwork in 10mm, and his trolls are good:
http://hetairoiwargames.blogspot.fr/2014/04/more-trolls-10mm-lotr.html

And finally, Feodalfig is showing us the work of a possible promising painter, who has done some WW2 stuff for him (Erm)
http://feodalfig.blogspot.fr/2014/04/seb-est-magique.html

Ok, back to my brushes and the camera
Publié par Unknown à l'adresse 21:29