Hello everyone.
Those of you who don't work today, just enjoy it, and probably the following week-end too. For the rest of the world, well, good luck.
Anyway. Tomorrow, I'll take the train at 6.30AM to Lyon, to attend the tournament the following morning. It will be a double with a biblical theme. I convinced Clive from my London club to attend with me, so we will be the first British team ( though not the first British players) to play in an Art de la Guerre tournament. Thankfully, the umpire has most of the minis we need to play our army, so I only had a few to paint, and they're almost done. Just the touch-ups and basing, and we'll be ready to go. 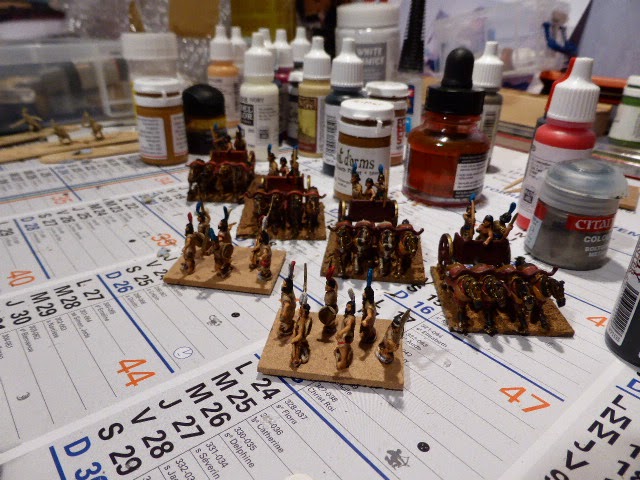 4 chariots, and 2 units of heavy infantry. All the minis are from Essex. I had bought them at Warfare, and I wanted to present the chariots for Curt's challenge, but couldn't find a painting scheme I liked, so left them as is. Now they'll be painted in red, and i know they'll go faster ;)