Hmmm. I' m now facing two choices: Doing only Romans or beeing weak and paint my  newly arrived French... Well, for once I've been strong. I'll be painting one unit of Romans, and I'll start bits from the French, just to get the feeling, you know ;)

So, First, the Romans: only 4 bases of legionaries remain, so I'll do them. But When Ludo gave them to me, some had their shields already glued on, quite badly I should say, and I couldn't remove them. Darn1. Then, one of them had primed in black, and I don't prime my minis anymore. Darn2. and one of them had a broken pilum, so I drilled in the hand and put a bit of wire. Darn3. Oh, I forgot: they're from the same batch as the others, ie with lots of defaults from the moulds. Darn4...

Then onto my French. I took a blister of AMX10P, the armoured infantry carrier, and based them. No need to clean, they were almost flash-free. Ahhh. at last some good news. 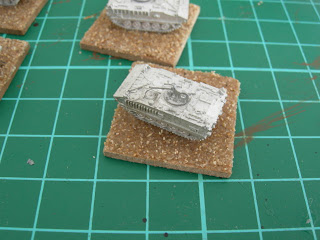