To general Mc Dowell.
Sir, I have the utmost duty to inform you that a brigade of South Carolina is headed your way, despite my efforts to prevent them reaching the rebels.

Today, while moving on the flank of our main army, to oppose any threat coming your way, I happened to face the brigade under the command of Magnolius N Bloom. He had the 2nd, 7th and 8th SC inf regiments, the 2nd SC cavalry and the Richmond battery.
We faced each other along the west road, slithering between a lot of cornfields, some woods and a hill.
He decided to attack in the center, with his left flank under protection of the cavalry.
I opted for a pincer attack, with the 14th Brooklyn and the 27th New York on my right, the 5th artillery in the center, my cavalry and the regulars on the left, towards the woods, where their weakest flank was (8th SC).
Everything went according to plan, the artillery and the 27th mauled the 2nd SC. I even ordered charges to cripple the advance, and the 2nd and 7th SC were severly damaged. On this occasion, the 27th and the 14th Brooklyn’s recruits fought with gallantry, and I can’t recommend them enough for their actions. Many rebels won't see their homes again.
But sadly, since we were in rebel territory, our plans were often revealed to the enemy, and we lost many occasions to strike the definite blow.

The Confederate, on the other hand, managed to outflank us with the cavalry. There were litterally thousands of them. I’m sure many more regiments had been concealed before and were waiting to ambush us.
The 14th Brooklyn fought valiantly against impossible odds, repulsing two charges, lead by frantic men who couldn’t stop screaming. It was an atrocious sound to bear, and many men from the regiment broke in the end, opening our flank, and disrupting the 27th, who faced them too, but managed to survive.

My plan to attack the enemy right flank was fruitful, though took too much time to coordinate. When the 8th SC was finally repulsed from the woods, it was already too late, and I ordered the general retreat, hoping I would be able to join your forces, following another route.

If I’m unable to do so, I’ll try to shadow the South Carolina’s brigade to make their march slower.

Please Sir, I urge you to be cautious, and to protect your flank while you march towards Richmond.


To: The Commanding General - Confederate States Army of North Virginia

Sir, I have the honour to report a glorious victory by my brigade on 6th inst. near the crossroads known locally as Ravi's Tavern. My brigade, consisting of the 2nd, 7th and 8th Regiments of South Carolina Volunteer infantry, 2nd South Carolina Volunteer Cavalry and the Richmond Howitzers artillery battery, encountered an enemy force of equal size commanded by Colonel John M C Lean, whom I informed was a police officer before the current conflict, although it seems he has a disregard for due protocol, etiquette and higher authority. Whilst this wretch was nominally in command of the federal forces, he was not personally seen by any of the several hundred prisoners we captured, and it seems the de facto commander was his chief of staff, Major Sebastien Gimeno, a recent immigrant of French extraction.

Upon receiving a report of the advance of the enemy, I led my brigade north from the tavern. My artillery deployed on a slight hill dominating the area, and I deployed 2nd and 7th SC to the left, with the cavalry on the flank, with a view to attacking the enemy right wing.  8th SC held the right. The enemy sent one regiment each of infantry and cavalry to assault my right wing. After some initial difficulty, the density of the woods and the staunch performance of 8th SC hindered the enemy advance. Indeed, with some support from the artillery, 8th SC inflicted more losses than it received, although it was charged and temporarily driven back by an enemy force which outnumbered if by nearly double.

In the centre/ left, two enemy infantry units executed a very smartly- conducted charge on both my other infantry regiments, which drove them backwards with some loss. 7th SC suffered considerably from straggling as a result, though many of the stragglers were later rounded up and rejoined the unit.  Whilst the now- depleted 7th kept up a brave firefight against superior numbers, 2nd SC and  the cavalry drove back the enemy 14th Brooklyn infantry, then charged a second time and caused that unit to disintegrate.  These two regiments were now on the flank of the other enemy infantry unit, and a gallant flank charge by my boys drove back this enemy unit with considerable loss.  Indeed, I believe that only some 100 men, out of an initial 1000, were with the colours when the enemy unit stopped running.

This flank charge clearly broke the will to resist of the enemy commander, and his troops began drifting backwards in ever- increasing numbers.

Being new recruits, the combination of the emotion and physical effort of fighting their first battle, added to the heat of the day and the disruption experienced by my raw units in combat, made it impractical to conduct a vigorous pursuit of the enemy.  Also, my scouts had received reports that other enemy forces were in the neighbourhood, so it would have been folly on my part to engage an unknown number of fresh enemy troops with my weary and disorganised brigade. Our losses from the battle amounted to 700 or so men, of whom the majority were wounded or stragglers and should in due course have returned to the colours in due course.  Unfortunately, there has been an outbreak of measles in the camp, with fatal consequences for dozens of men.  My initial force has therefore been reduced at present to 1500 men from its original pre- battle total of 2,000.

I am pleased to report that all my regiments conducted themselves well, and there are signs that the 2nd and 8th SC have become more proficient as a result of the battle. The enemy abandoned two howitzers in their retreat, due I suspect to panicky artillery train drivers, so I am pleased to report that my brigade now has an additional artillery unit.  Also, a new regiment (9th SC) had arrived in the area. Its commanding officer has delivered to me a letter of introduction from the state governor, a personal friend who owns a nearby plantation to mine, and I have therefore taken 9th SC into my brigade on a temporary basis, pending your confirmation that this is approved. 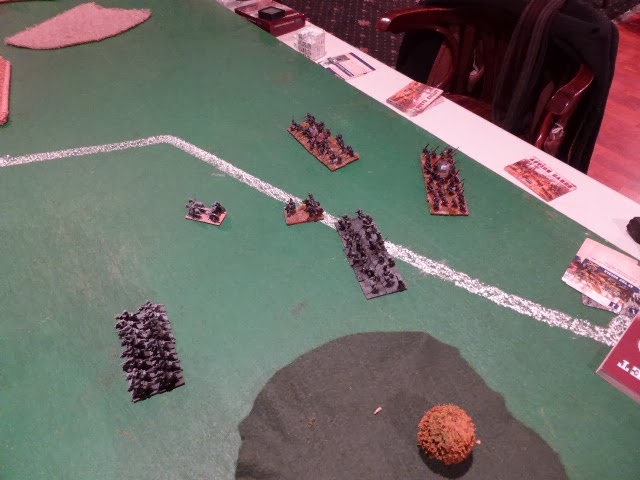 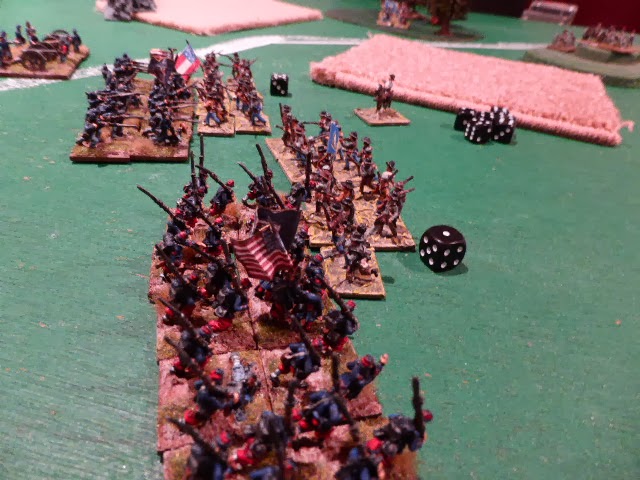