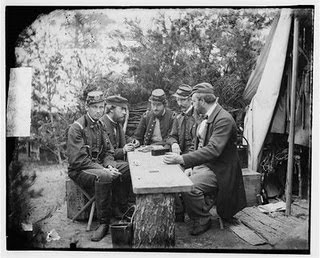 Here is a new episode of my Longstreet campaign, set during winter camp 1861-1862

Many weeks have passed since my last letter. I'm sorry about this but a lot happened, most of the time for the better. After my first battle, I had been unable to conduct my original plan, but I managed to get to the main camp, where I learned that the grand battle, near a small creek called Bull Run, had been inconclusive. I won't tell you anything new, you must have learned it from the papers.

Trust me, the eagerness seems to have disappeared, for we all know it will be a long war. Besides, I have stopped counting the deaths amongst my men. Not from their wounds, but from sickness. Great Lord, pestilence is much more formidable foe than Johnny Reb. I had to bury them and write more than 500 letters. Sometimes, it's just too much.

But enough with this sad story. Yesterday, our new general in chief,General Mc Clellan, came to visit us. He mad a wonderful speech in front of the veterans of the 14th Brooklyn, and praised the martial values of my Regulars. Trust me, their morale rose instantly. He also announced my promotion from Lt Colonel to full Colonel! What an honour.

And to celebrate this, he told me he would give me some reinforcements. I am now waiting for the 15th Wisconsin, and the guns of the 2nd Minnesota.

But something tells me we're about to move soon. Already the tension is beginning and rumours are spreading. I can't give you any details, of course, but I'll tell you this: this is going to be a big one.

Now, what does this mean? Well, I got promoted, obviously, which is always cool. Then, this is my new roster: